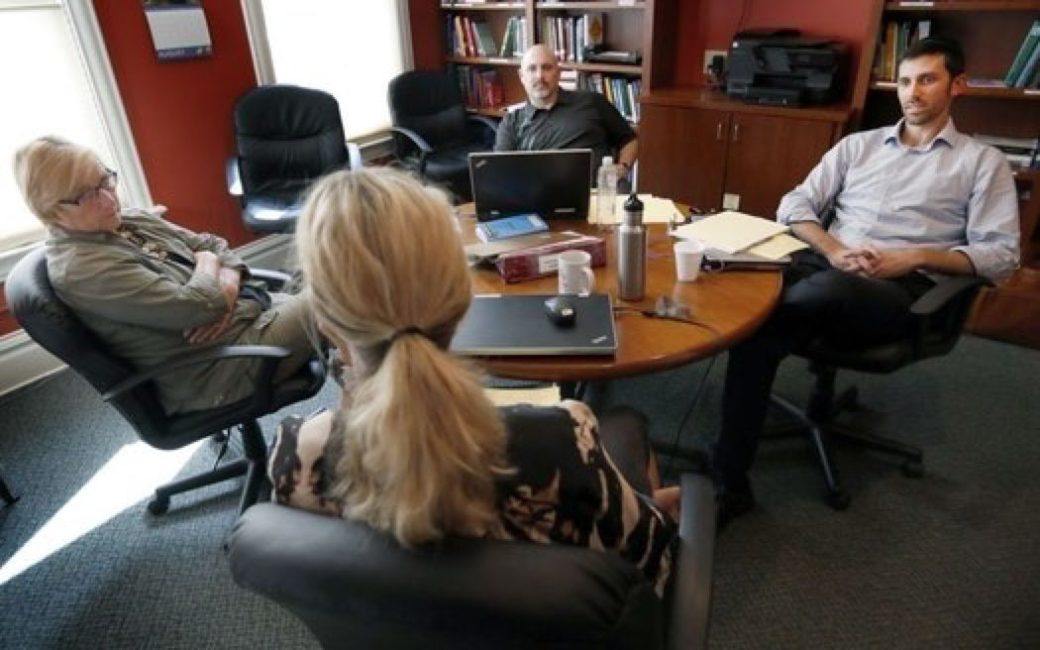 Steeped in emotion after a difficult breakup, Kristen Perron realized she couldn’t wait weeks to talk it out with a therapist she had booked through her insurer.

So she turned to the Walk-In Counseling Center in south Minneapolis for a free, immediate and anonymous counseling session with a professional.

“It is really hard to admit that you need any sort of help. … Walk-In makes it easier than any other resource,” said Perron, an educator and social worker.

And with the holidays approaching and the churn of emotions they often stir, Walk-In promises help fast. “If you are in crisis, you can’t wait months. You can’t wait weeks,” said Walk-in Executive Director Mary Weeks.

Founded in 1969 by a group of young psychologists at the University of Minnesota worried about the health of young people who had left their families for the ’60s counterculture, Walk-In was considered one of the first free clinics of its kind in the country.

Nearly 50 years later, the West Bank hippies are long gone but the innovative clinic is thriving and has expanded to locations in St. Paul, even as its no-name, no-insurance model remains a rarity.

About 140 professional therapists volunteered their time for 5,600 sessions last year. More than 2,000 clients of all ages and incomes stepped through the door to talk about everything from bad breakups and work stress to depression and thoughts of suicide.

Until 2003, Hennepin County paid 85 percent of the nonprofit’s budget. That ended when state aid cuts forced the county to cancel its support. But the center’s six staffers and volunteers rallied, and they now raise the $475,000 annual budget from private donors and foundation grants.

The work has evolved as societal stresses changed. After the terrorist attacks of Sept. 11, 2001, there was a surge in clients. “Everyone in this country was bewildered and they felt vulnerable,” Weeks said.

Then they saw a big uptick during the Great Recession, as folks reeled from job losses and financial hardships. Now they’re starting to see more people of color come in, speaking of despair over racial inequities.

They see members of the LGBT community talk about bullying and discrimination, and they counsel immigrants torn between traditional values and their new lives here.

“Sometimes being heard helps [people] figure out that things are not as bad as they seem,” said retired social worker Mary Ann Jurney, who has volunteered at Walk-In for seven years. “A lot of mental pain comes from how we think about or perceive a situation.”

Without barriers or stigma

“If someone is desperately floundering, you can help them focus: What can they do today that they have control over?” Jurney said. “It helps get people out of that crisis mode.”

Some return and develop rapport with a certain counselor; others use Walk-In as a stopgap until their insurance kicks in or they get a regular appointment.

For some, Walk-In is a way to explore counseling without cost, commitment or perceived stigma. Some find its location in a house calming.

For others, the anonymity that Walk-In offers is the only safe way to get counseling. For a battered woman or a young person with questions about sexuality, a paper trail left by an insurance claim can wreak havoc, Weeks said.

A group of three to four counselors sees clients one-on-one for several hours. Afterward, they meet in a conference room to discuss their cases and brainstorm.

They are careful not to use names or information that might identify their clients.

Dave Wood, a counselor, has volunteered at Walk-In for nearly a year.

“I love the idea it removes all the barriers,” he said. “And I like the team model. There is a lot of freedom on how to work with a client but there is a lot of support and consultation.”

Walk-In volunteer counselors must have a master’s degree or Ph.D. in psychology, social work, professional counseling or marriage and family therapy. Some may be advanced graduate intern/practicum students working on their degrees.

Weeks acknowledged that it’s tricky measuring Walk-In’s impact. Of clients who responded to a recent survey, 75 percent said they felt more able to cope, 95 percent felt more hopeful as a result of going to Walk-In, and 98 percent said they would refer a family member or friend.

“We can’t prove what we did prevented someone from doing some terrible awful thing down the line,” Weeks said. “We hear from clients it was life-affirming.”