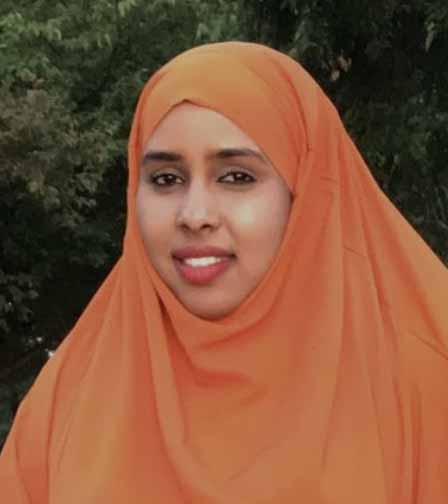 When Walk-In volunteer counselor Sucdi D. helps clients deal with trauma, anxiety or depression, she has a deep well of experience to draw from.

“I grew up in Kenya, in a refugee camp,” Sucdi recalls. “It was rough. While I don’t disclose my own experience, I can use it to relate to what the client is going through.” Born in Somalia, Sucdi was a baby when her family had to flee the country because of the civil war, during which her father died.

It was during her time in Kenya that Sucdi developed a strong empathy with people with mental illness – primarily through the example set by her mother.

“There was a stigma around people with mental illness. People did not view them as human, and kids would throw rocks at them. They were treated like they couldn’t feel pain. My mother was very clear with us – we were never to participate in that.”

Although her family had very little, and her mother was illiterate, their home was always a shelter for others, such as women fleeing domestic violence or hungry neighbors. When she arrived with her mother in the United States at age 15, Sucdi already had two children and was pregnant with a third.

“I was forced to marry at age 13. My mother forced me, as she had been forced when she was young. I don’t blame her. Even though she wasn’t perfect, I’m thankful for the things she taught us.” Her mother, who passed away two years ago, set such a strong example of helping others that Sucdi thinks of her as a social worker too.

Once her children got old enough to make it possible, Sucdi enrolled in college. Her oldest, a son, worked during high school to pay for his mother’s first four years of college.

“Now, I’m paying for his college, with some help from scholarships. It’s been a team effort. In a way, we grew up together,” she says of her children. Her older daughter is a starting college this fall, also planning to become a social worker. Sucdi’s two brothers, who are doctors, are also involved in mental health.

“Even though I come from a family of social workers, it took a while for me to decide to go into social work,” Sucdi says. While she was an undergraduate planning to go into health care management, “everyone was telling me I was a natural social worker,” she recalls. “I had been advocating for food and shelter for other students (at St. Mary’s University) and I didn’t realize that what I was doing was social work.”

Soon, teachers encouraged her to apply to the St. Mary’s University social work program. She became a Walk-In volunteer while studying for her master’s degree in social work at St. Mary’s, which she will complete this summer.

For her capstone project, she researched barriers the clients encounter when seeking mental health care. Cost is an important one, and Walk-In being free is a major service to the community, she noted.

One barrier she identified was the small number of mental health practitioners who are black, Somali, or members of other nonwhite groups. This is the case in training programs and also at Walk-In. In 2019, 42 percent of Walk-In’s clients were non-white. Despite that, as Sucdi says, “Walk-In doesn’t just do a good job serving clients. We do an amazing job!”

But there is always room for improvement, and her recommendations included more cultural awareness training and better representation of people of color among volunteers. To that end, she has started recruiting volunteers among colleagues. She is also starting a support group among Somali mental health practitioners.

“It’s very hard for many people of color to volunteer. Time is literally money,” she notes. As a Walk-In volunteer clinician, Sucdi’s experience helping clients during the stressful pandemic times solidified her appreciation for Walk-In’s service to the community. Many times, a client calling in would be distressed and in tears, and by the end of the session, they would feel better, having a plan like going for a walk or talking with a friend.

“Where would we be without Walk-In? I really don’t know. Walk-In is supporting community mental health in a way that no other clinic does,” Sucdi says.

Recently, she found a piece of paper among her student materials with Walk-In’s phone number written on it, given to her by a counselor at college. “I was experiencing anxiety at the time, and I was referred to Walk-In.”

Now that she has served others at Walk-In, she feels like she has come full circle.  This summer, she will finish her master’s degree in social work. “This is what I was meant to do in life.”

*Walk-In will be CLOSED on Monday, May 30th for the Memorial Day holiday. We will re-open for regular hours on Tuesday, May 31st.